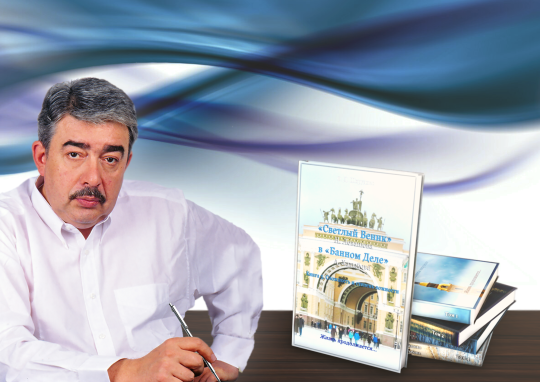 FEODOR SHKRUDNEV COLLECTION OF ARTICLES AND PUBLICATIONS 2012–2013 In two parts Part I F. D. Shkrudnev began writing this Collection of articles and publications in 2012. because he promised to continue the work begun by the Russian Scientist N. V. Levashov after his tragic death, and because this was the year of the start for the transition from the existing human existence within the framework of the parasitic civilization to the recreation of the true Humanity. This Collection covers the widest range of human life from alpha to omega having a very clear vector at the same time. Basically these publications appeal to thinking and conscious people, to those who are not indifferent to the future of the people and the Planet. Paperback - $28 US.

N.Levashov's "SvetL Broom" in A.Khatybov's "Bath School" and a labour spade. The continuation of the third volume of the monograph "The mirror of my soul", unfinished by Nikolai Levashov.

⚜ Book 1. Unmasking the hidden. (Intervention: how it happened)

I decided TO WRITE MYSELF, and to publish the information that was available to me, talking about the knowledge that was gained and tested, and to go on providing information about those Technologies that have already been working to do good, to relate not only about OUR COMMON plans and thoughts, but also about that knowledge (gained from the works by A. Khatybov and other scientists) which made it possible to comprehend, create and extend the applications of  "SvetL" Programs. When I began to work in this direction, everything proceeded on its own accord, as a sequel of the third volume of his uncompleted work "The Mirror of My Soul", and my comprehension of what was going on.

⚜ Book 2. The Bath School. (Who and in what way is washed in the bath)

I am more than sure that in the course of scientific development and practice (especially, practice and, as an example, the development and application of "SvetL" Programs today), the scientific picture of the world will be amended, corrected and improved.  But this picture will NEVER GET THE CHARACTER OF THE ABSOLUTE TRUTH. First of all, because it is a process of search and cognition, then cognition and searching again for the new, and what holds out promise for doing good.

I conceived these books as a source practical guidance. A theoretical book is read and put on the shelf, but a practically oriented one is not only read, but followed in life. I really want this; but it is for you, the readers, to judge.

⚜ Book 3. The Cell and the health. (the origins of the health are in the living cell)

While working on the book, I was aware of the fact that the overwhelming majority just would not get to the point of the written. There are many who after reading might give some mental assessment of this, saying "well, it is rather tricky...", and the next moment will forget most of it, plunging into their momentary everyday problems. But for the sake of those individuals whose number is growing continuously, those who are able to hear out and absorb information, speak out and write — it is worth doing.

⚜ Book 4. The physics of the realities. (Supplementing the accepted mosaic of reality)

In this and previous books I tried to give the alphabet and grammar of New Knowledge. You will find the answer to the question of how the Earth came into being, what happened to Man for the last 20 thousand years, why the development of Man went exactly this way, and not otherwise. What the Brain Genotype is, in what way and for what purpose the Brain "interacts" with the "SvetL" Programs, applied in the "Dark Matter" Generator, created by the genius of Nikolai Levashov. You will find the solution of what is happening with the weather on the Planet today, which all synoptics together are not able to explain, and its effects on your health and the health of your loved ones. You will get recommendations on the application of the "SvetL" Programs in relation to your recovery, and in addition, on their possible application in other directions. You will get a chance to guess the "mystery" of "making" the queue to the Bath and getting into this queue and know how, in joy, not to forget about the Broom and the Spade...

⚜ Book 5. Complexity and degree of falsity. (The Bath for simplicity)

Man's life passes like a dream. To understand its meaning, you have to wake up. Changes in the outside world are beneficial only when they come from the inner world of Man. Everything that exists and does not exist in this world, – all this is here – in the Soul of Man, his Spirit, his Brain – whatever you like to call it. Cognizing all this as the Truth is the sense of Life.